*Not available on Saturday 5 February.

Find out about Member discounts

Experience an extraordinary immersive experience with the Illuminate night projections at Boola Bardip.

This permanent, digital projection series highlights the brilliance of our State — our unique landscapes, people, and the history that has shaped our collective identity and place in the world.

At Illuminate, the Museum’s Old Gaol comes alive each night with a multisensory, kaleidoscope of light, inspired by the Museum’s collections and Western Australia’s natural beauty.

The inaugural projection experience Timescapes is a visually rich, creative response to the objects and items of the Museum archives.

It has been inspired by the six Nyoongar seasons and weaves a collection of narratives inspired by deep time and traditional Aboriginal knowledge and contemporary technology. It’s a surrealist journey through time and place in Western Australia.

Come and be inspired by the sights, sounds and stories of your State. 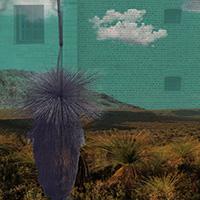 Beautiful and healthy WA natural landscape filled with trees and thick undergrowth, representative of the wetlands as they would have existed. 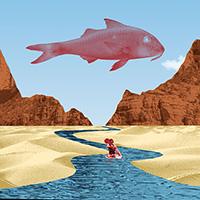 Sand builds up like coastal dunes and the weather changes with fresh sea breeze winds. The colours reach their hottest, bringing out red, burnt tones. It is a time of the rains and fast flowing water snakes across the land bring rivers and pools of water full of fish and frogs.

Lines of fire cut through the sky as meteorites start to fall in a shower, erupting a collage of images and newspaper clippings from historic meteoritic events. The sun dips down – a huge red, sweltering disc – setting over the ocean in miraculous colour. 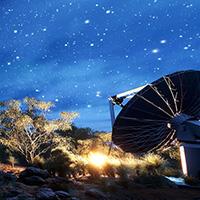 Stars appear in the sky and the ancient trees are dwarfed by the scale of the sky. Nocturnal animals watch the sky above and the Emu in the Sky appears as the satellites turn to listen to the Universe.

Skylab floats into view then crashes to the ground. The city unfolds, as seen from above, with familiar streets of Perth today – highlighting the declared prohibited area for Aboriginal people (1927-1954). The lakes of the area appear blossoming with aquatic colour. 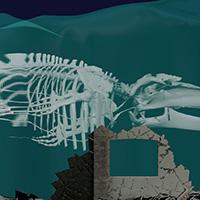 A storm is brewing, bringing lightning and thunder. The rain starts to pour down. The whole area floods as the water line grows higher and higher.

A sailing ship sails in but is lost to the sea in a storm, like the many shipwrecks off the coast of WA. The ocean comes alive all along the West Australian coast – from the Kimberley to the Great Southern. The ocean is teeming with sea life – dolphins, sharks, a Ruby Seadragon and Otto the blue whale skeleton. It’s perfect for traditional fishing practices of Aboriginal people. 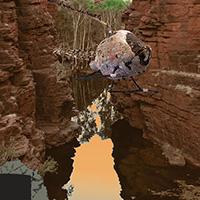 Gorges and canyons, horizontal falls and pink lakes tower above in a vast scale. Jandamarra’s Helicopter glides over the land journeying along waters to the wetlands. Ancient stromatolites rise in the salty waters, as magpies swoop to protect their babies nearby. 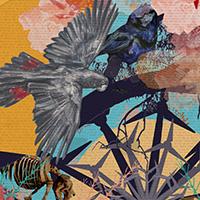 Every surface starts to bloom – new life on the precipice of explosion – as wildflowers open in miraculous patterns of colour. Birds perch in the trees and sweep through the sky turning the flowers to new splendid colours. Wind turbines turn gently, generating sustainable energy.

Larger than life snakes wake from hibernation and wind their way out of hollows to find the sun. Giant diprotodons and megafauna appear on the scene and graze on the grass. Children appear, juxtaposing the ancient with the new, the timeless and the timely, symbolic of the diverse and vital stories of our Museum.

The WA Museum acknowledges the diversity that exists in Aboriginal and Torres Strait Islander languages and that the spelling of words may also vary. 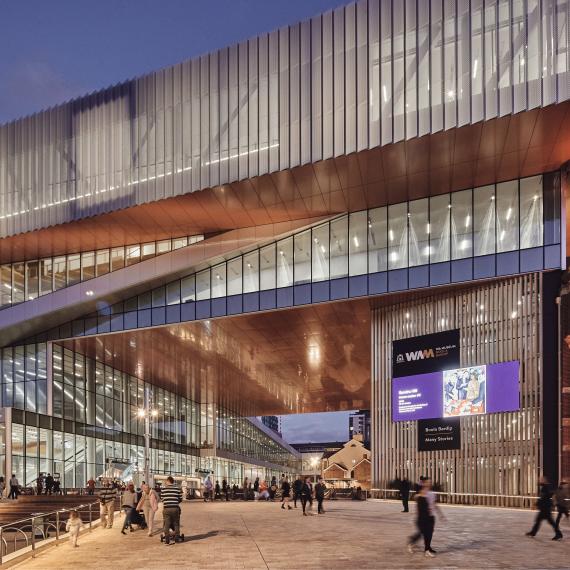